from Strange Future by Universal Harmonics 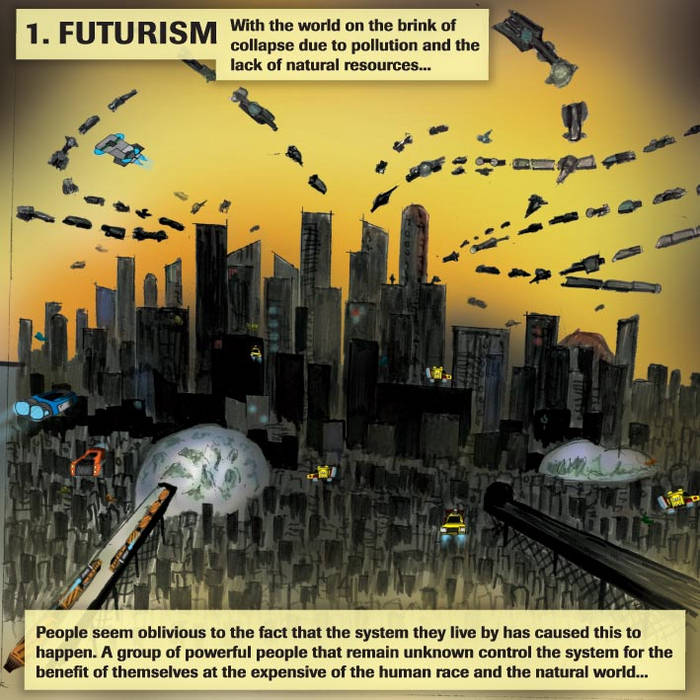 About this track:
With the world on the brink of collapse due to population and the lack of natural resources...
People seem oblivious to the fact the system they live by has caused this to happen. A group of powerful people who remain unknown control the system for the benefit of themselves at the expense of the human race and the natural world...

Well who had anyway of knowing
The seeds had long been sown
It would have been great
If we had of listened in two thousand and eight
Or earlier like the late
Twentieth century, they got us eventually
Big business and the oil companies
Plotted and schemed behind the scenes
With aliens who remained unseen
Poluting the world, making it unclean
Minimizing the indigenous population of human beings
Preparing the planet for alien colonisation
Altering the air from oxygen to carbon
Because carbon is what they breathe in
With no ozone, defences were thin
Melting ice caps, exporting water
Back to the planet of origin
Unable to resist their mind manipulation
Zombie slaves ready for exportation
Controlled consumers provided no retaliation
Unable to do what came naturally
People left fiending for more pornography
From the age of the extended family
Nuclear families to the solo parent
The age of individuals was apparent eventually
Which left people unstable mentally
Implanted cells gave us imaginary imagery
To replace the sense of family
They kept out leaders who led us astray
As their pets for the rest of their days
A select few who refused
The lies, the dirt and the faeces
Were the only remaining hope
For the survival of the species
Believing the gift of life was amazing
Self defence with all guns blazing
They sought to escape and create
A new start and a true civilisation